navigate_before Back to Puzzles Solution for 2.05

If you happen to be familiar with the info base used in this puzzle, things will proceed more quickly. If not, Googling for the words in the top-left box together (it makes sense to start there, since that’s where you have the most information) reveals that these are the English translations of the Japanese first names of characters in the anime/manga series Naruto.

We can thus assume that 1) each box represents an anime/manga series, 2) each rectangle represents a character, 3) the given words are the English translations of their Japanese names.

How should we interpret the circles? The flavourtext contains the word “animatedly” and suggests that speech is involved. The intuitive leap here is to realise that these are specifically anime series, and that each circle represents the voice actor of the corresponding character(s).

There are various routes and short-cuts that can be taken, but eventually you should get to the answer: the English voice actor of Benares from 3x3 Eyes, who is EARL BOEN. 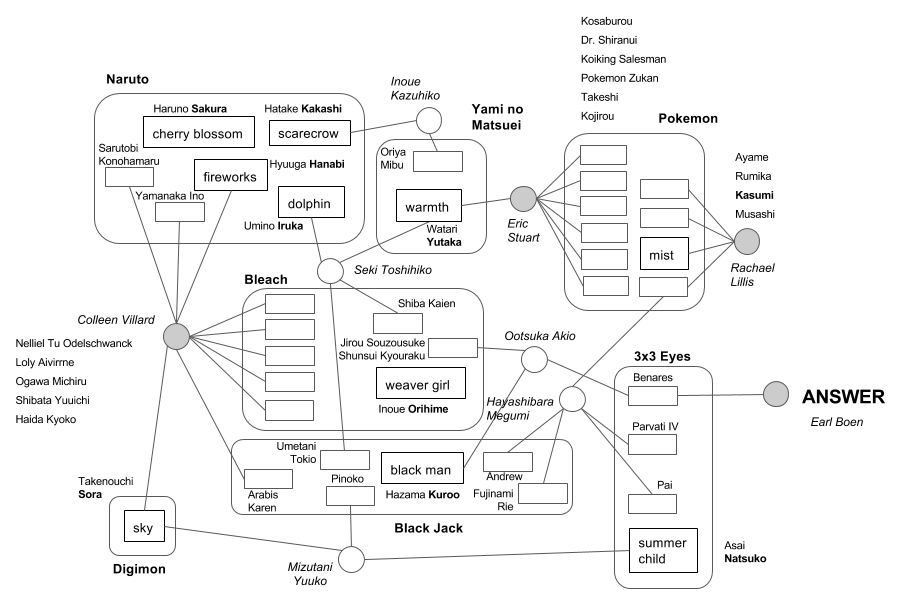 I wanted to create a puzzle which didn’t involve indexing and which had multiple routes to the solution. Since I limited myself to 1) first names only (for consistency), 2) literal translations that took kanji into account (meaning, among other things, that I couldn’t use Ichigo from the series Bleach), 3) relatively non-obscure series, the actual pool of characters I could use turned out to be quite small.