A big thank you to the 150 teams who spent your weekend with us solving our puzzle hunt. We hope you enjoyed the hunt, as well as the hidden Hunger Games theme and mini storyline! This is our first experience setting an online hunt that is open to an international community - we aimed to encourage greater Singaporean participation by having a final puzzle that requires teams to be physically in Singapore to claim the mystery prize, but also wanted to let Singaporean puzzle hunt teams benchmark themselves against international puzzle hunters.

When designing the hunt, we were worried that the hunt would be solved too quickly by experienced international teams. The final puzzle mechanism was designed to encourage teams who made good thematic guesses in the first two rounds (without actually solving some of the puzzles) to go back and properly work through them. (We tried to make it harder to eyeball the cluephrase, though several teams managed to do so anyway.) As it turns out, that did not deter the top team, Aviation Laws, who completed the hunt in just under 10 hours!

Aviation Laws
for their prodigious performance

We would also like to give special mention to the following teams who successfully provided reinforcements to the coup against the Capitol and emerged victorious. They are (in order of completion):

If you’re wondering, the thematic mystery prize is a copy of the board game Coup, which was awarded to Aviation Laws for being the first team to take a selfie at the coup headquarters under the Botero bird sculpture along the Singapore River.

The hunt team had a really great time preparing for the hunt and reading through the guess logs. If you haven’t already done so, please leave your feedback on our first puzzle hunt - we really appreciate your honest comments on the puzzles and hunt structure! We’d also love to hear about any memorable moments and quotable quotes from your hunt experience, and we’ll be featuring some of the more amusing ones here as they come in!

We’ve also received a couple of requests for this hunt to be made an annual event. Right now, we’re still undecided, but we’ll take into account your feedback in exploring future possibilities for the hunt.

Lastly, we’d like to hand out unofficial awards to teams which have impressed or amused us throughout the hunt!

💼💼💼 Galactic Jobhunters 💼💼💼
for solving Observation just 15 minutes into the hunt!

🔥🐶☕This is fine.☕🐶🔥
who solved Reaped Again! just 6 minutes before the end of the hunt
also making them the final team to solve the final meta!

🕶️🦈🕶️ secretly sharks 🕶️🦈🕶️   &   Amateur Hour   &   Mystik Spiral
various other teams, with various degrees of efficacy (you know who you are…)

Thanks for making the first REDDOThunt a great experience for us -- we hope you all had fun too.

True to their team name, Team Tricky set a trap to electrocute all other teams coming to the hunt’s final location. We wonder if they are spies for the President… 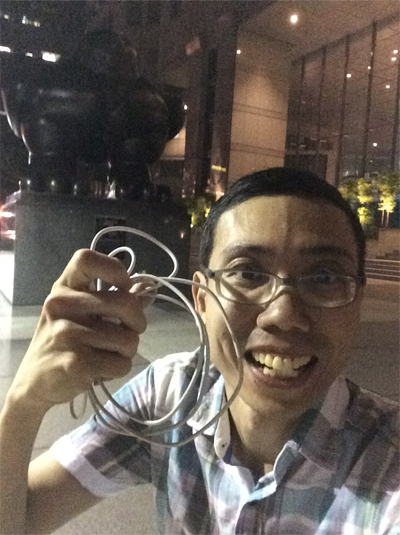 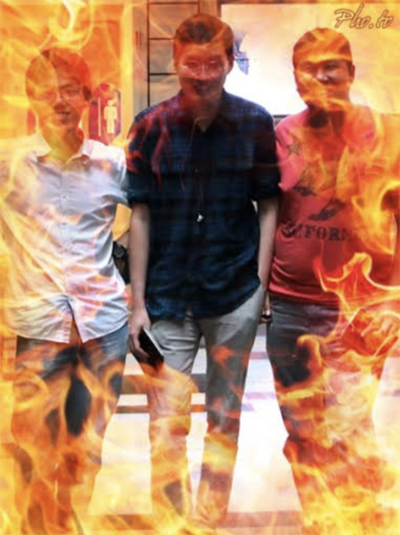 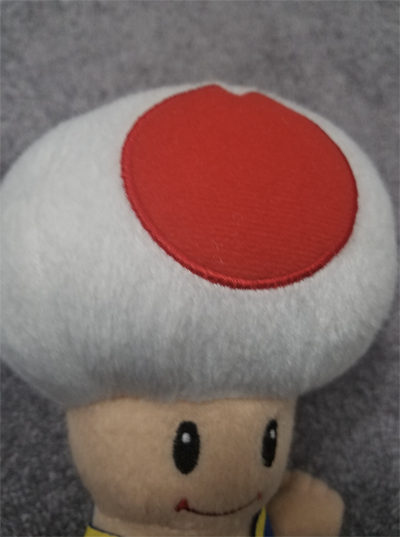 🔥🐶☕This is fine.☕🐶🔥 shared his experience as a dedicated solver: I took Friday off from work for this hunt, but still went to the office to have lunch at the cafeteria. To let people know I wasn't working, I taped a piece of paper to myself that read in large letters "On PTO, doing puzzles".

Aviation Laws’ ManyPinkHats, upon reaching one of our more obscure answers: "E IN KORN? like the band Korn? which one's E?"

Chao Tar Chai Tow Kway recounted their experience solving Observation: “After getting BIRDS’ WINGS as a clue, we stared at the picture for so long, thinking that there is a hidden bird that we missed out. In the end, it felt like even the smiling scarecrow was mocking me.” Looking at the guess log, I’m sure many teams shared the same sentiments!

💼💼💼 Galactic Jobhunters 💼💼💼 recounted their experience solving Johanna Mason:
"Is that a person or a Feynman diagram?"
and Morphling:
“It was really funny to solve clues and loudly shout things for Morphling.” 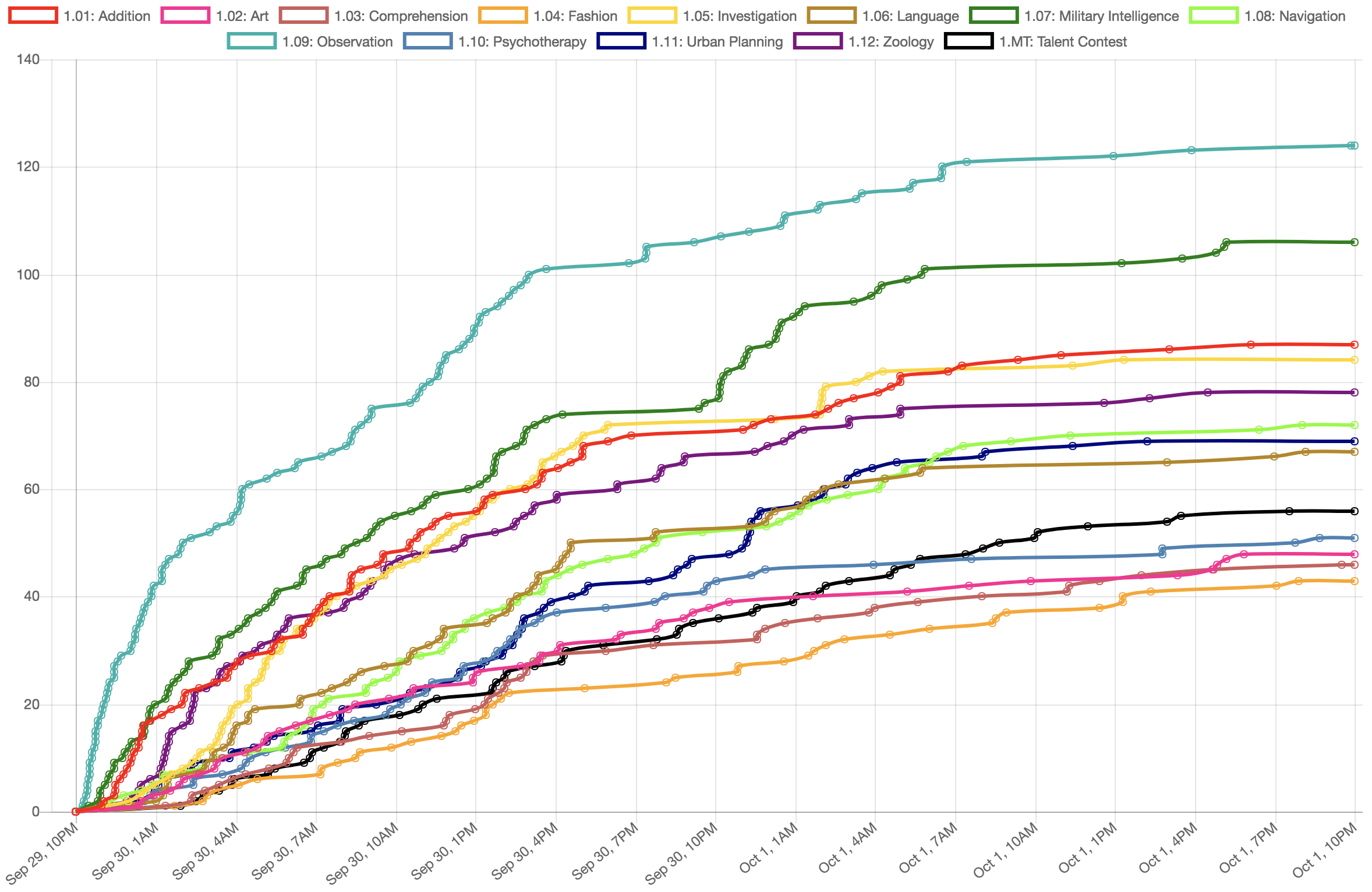 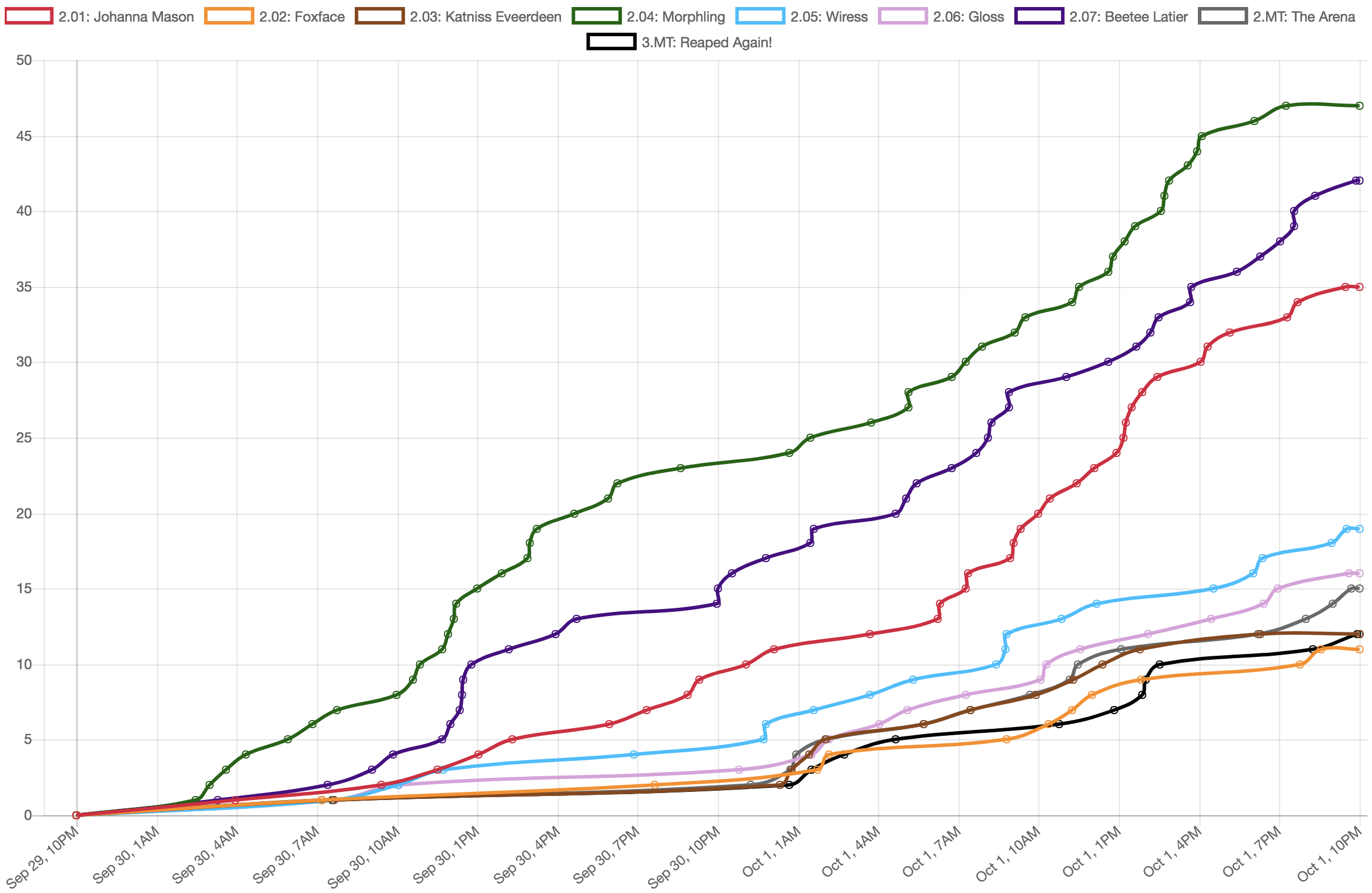