navigate_before Back to Puzzles Solution for 2.01

This puzzle is inspired by Johanna Mason, who was said to be sly and has a “wicked ability to murder” but passes off as a weak and innocent girl, like many of the culprits in Sherlock Holmes’ mysteries.

The first observation is that the sum of the evidence markers equals the total number of squares, which suggests that the evidence markers actually denote the area of the cordoned box drawn around it. You may also notice that the number of pieces of evidence is also equal to the number of evidence markers. As instructed by the flavourtext, each cordoned area should also contain a piece of evidence. For experienced puzzle hunters, you will know that this is actually a Nikoli puzzle called Shikaku, though knowledge of the puzzle name is not required if you can figure out the puzzle mechanics based on the observation. 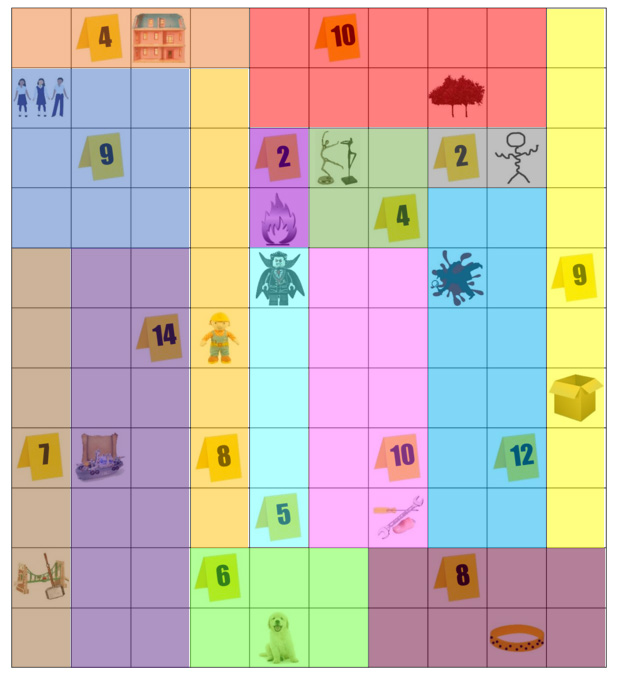 Having cordoned off the evidence, we now examine the evidence in each box. Solvers will next have to either make an intuitive leap based on the crime scene theme, or attempt to google some phrases clued by the evidence (an obvious lead in will be “Thor Bridge”) to arrive at the theme of this puzzle - Sherlock Holmes mysteries. After identifying the mystery that corresponds to each piece of evidence, solvers will have to look up the culprits of these mysteries as instructed by the flavourtext. The evidence markers then provide an extraction mechanism to extract a letter from each of the culprits’ names, as listed below.

The extracted letters, when read in the order of the evidence, gives the cluephrase A CASE OF IDENTITY, which is yet another Sherlock Holmes mystery, and also describes your efforts in uncovering the identities of the culprits behind each evidence.

The culprit of this case is JAMES WINDIBANK, which is the answer to this puzzle.

The original answer to this puzzle was meant to be a much more familiar James in the Sherlock world - James Moriarty. This would have been a more fitting answer to the puzzle as well, as James Moriarty is well-known to be the mastermind behind many Sherlock Holmes’ cases - hence the idea that he is the mastermind behind the crime scene in the puzzle. Unfortunately, due to the structure of the meta, James Moriarty would be an easily back-solvable answer once solvers get the Sherlock Holmes “aha”. As a result, we had to compromise with a lesser known culprit amongst Sherlock Holmes mysteries, but thankfully the case title was still sufficiently thematic to the puzzle.